Last week I kicked off a series where I planned to discuss each of the five personal training sessions that I purchased from CustomFit Training. This is the second entry of that series. If you missed the first, feel free to jump back and read that one before starting in on the one below.

On Thursday I stepped out of my front door and unsuccessfully tried to dodge cold raindrops as I made my way to the car. It was just about time to get started on my Second Personal Training Session with CustomFit Training. I had been stuck inside the house all day and was looking forward to getting out for an hour and burning a few calories.

When I arrived, Bobby and I sat down and briefly went over the plans for our second session together. The program would more or less be the same as last week except we would be doing the exercises in reverse order and they would be treated more like a strength training session.

Instead of the interval approach, knocking out as many reps as possible in a short window, I would be working towards a prescribed number of reps for each movement. There was some comfort in this approach as it is how I spend my gym sessions. Before lifting any weight, I made my way over to the rowing machine to warm up. Bobby set the distance for 1,200 meters and I began pulling. I don’t typically spend too much time staring at the screen, mostly because I don’t know what half the information is, but I did take notice that I was holding between 29 and 31 strokes per minute.

After crossing the 1,200 meter mark, Bobby made a note of the elapsed time and told me that we would be trying to beat it next week. Time spent on the machine wasn’t more than few minutes but it was a decent workout. I had a good sweat starting and was ready to start throwing some weight around. 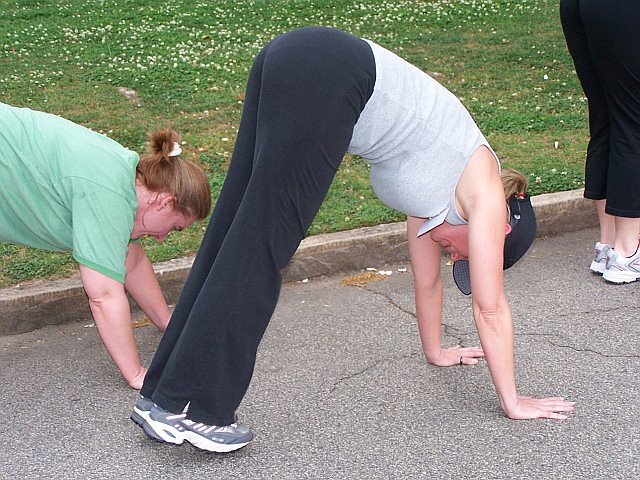 With the familiar sound of a sandbag thudding on the floor, it was time for me to get to work. Just like the week prior, I bent over at the waist and put my hands on the sandbag. Using my core, I pushed the bag away from me and slid into a plank position. After a brief hold, I baby-stepped my feet back in and started the process over again.

I went across the room and back again, thrilled that it was over, when I learned I’d be doing it again. This time I had to ditch the sandbag. As I walked my hands out to put myself in the plank position, my wrists began to ache. I had to take several breaks, shaking out my wrists, before I made it across the room.

Surely we were done now, right? Nope. This time I had a pad under my feet. I would walk out with my hands then, instead of walking back in, I had to use my core to drag my feet back into the start position (the pad allowed my feet to slide across the floor).

I didn’t get very far before I had to stop due to wrist pain. We called it at that point and moved on to the next exercise. 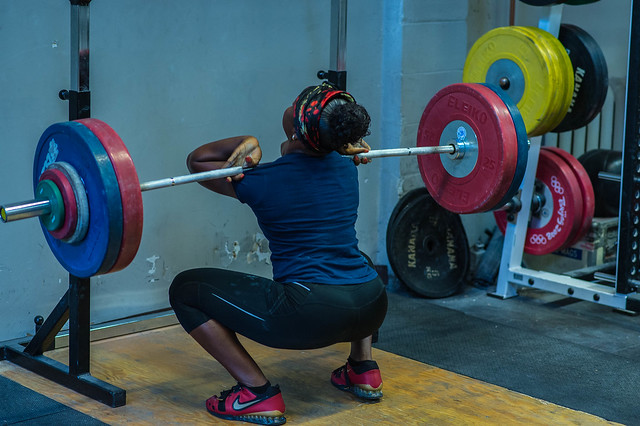 Front Squats are an exercise that I enjoy less and less every time I do them. It isn’t the burning quads, it is the bar position that kills me every time. I can’t comfortably rest the bar across the front of my shoulders and manipulate my arms to keep it there. If I try to hold the bar like I would for a military press, it is more comfortable but still leads to strain in my wrists.

As a last resort I’ve been crossing my arms and allowing the bar to rest on my arms and chest as opposed to my shoulders. This prevents wrist pain but, after a few reps, it feels like I’m performing an upper body exercise as those are the muscles to fatigue first.

Knowing what I had ahead of me I did much better with Front Squats this time around. It is one of my least favorite exercises (which is funny given that Back Squats are one of my favorite exercises) but they serve a purpose and do a great job of working the quads. 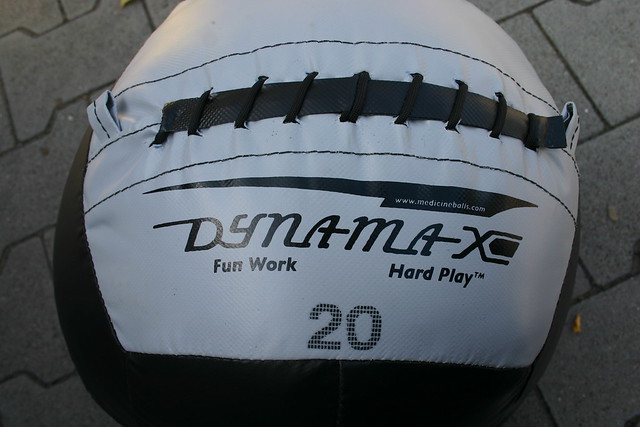 Because it was rather cold and wet outside, we swapped out the Tire Flip from last week with a Medicine Ball Throw. The objective was to perform the same movement as I would flipping a tire. Get down into a squat position, get my hands under the ball, drive up with my legs, then finish the upward thrust with my arms.

The exercise is actually kind of fun and does a great job of fatiging the legs and arms. My only issue was that I had a tendency to not get completely under the ball. Instead I’d have my hand oriented towards the outside edges. While driving up, my hand would slip a bit and I’d lose some upward momentum.

We started out with a 14 pound ball for the first set then transitioned to a 20 pound ball for the second and third sets. 6 pounds doesn’t sound like much but it is amazing the difference it makes in an exercise like Medicine Ball Throws. 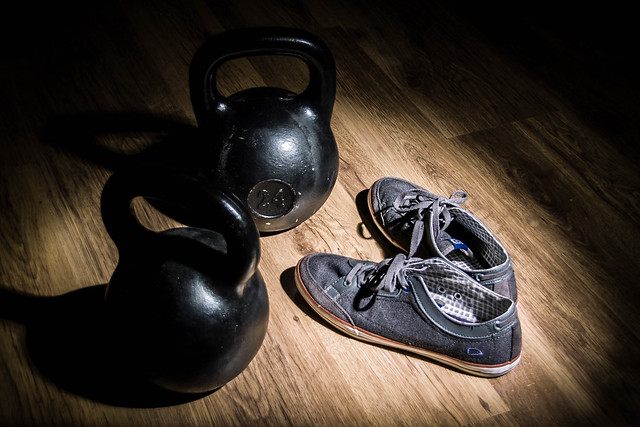 There really isn’t much to say about the Kettlebell Curl and Press. You do a basic curl, rotate your wrist, then press the kettlebell over your head. Do the exact opposite to bring the weight back down to the starting position and you’ve completed one rep.

In this session we started with 25 pounds. This was the weight that I moved up to the previous week when I felt 20 pounds was too light. Unlike last week, I really struggled with the weight and it showed. The day prior to this session I worked chest and arms at Anytime Fitness of Gilbertsville. While I wasn’t all that sore, my muscles were still fatigued and it impacted my curl and press.

After the first set I dropped down to 20 pounds and was able to perform the required number of reps. 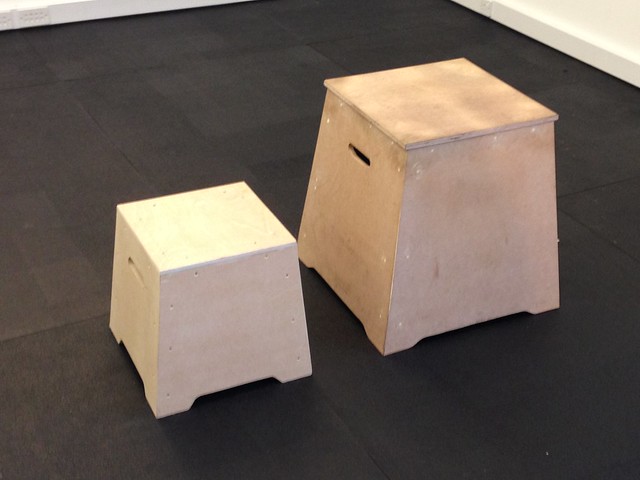 The Step-Up is a pretty basic exercise. Basically, anytime you walk up a set of stairs you are doing a series of them. You put your foot on an elevated platform and drive your weight up. Of course, step-ups in a gym environment are a little different in that you typically isolate one leg instead of alternating from one to the other.

To make things even more difficult you can perform the exercise without taking your driving leg off of the raised platform. This reduces the time of rest for your quadricep and produces a joyful (I say that sarcastically) burn in short order.

This week I was performing step-ups on a 14″ box with a 20 pound weight in each hand. It did not take long before the burn set in. Oddly enough, I can deal with burning muscles on my upper body without much trouble. A burning quad though, that is just plain painful. 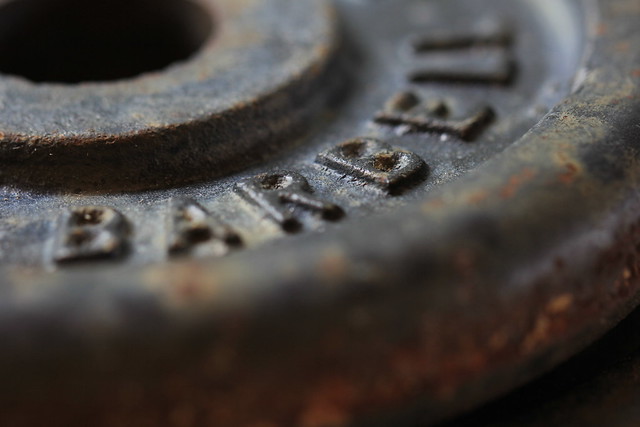 that I was concerned about grip strength becoming an issue during deadlifts.

To my surprise, Bobby just happened to read that status update and incorporated a couple of grip exercises into the session. The first of which consisted of reaching down, grabbing a firstfull of 30 pound sandbag, raising it up to shoulder hight, then letting it fall back to the floor. The tricky part was holding for a pause at the top of the movement. Due to the sand shifting between my fingers, it made holding on to the bag a challenge.

After we were finished with the sandbag he went around and collected four 5 pound Rouge bumper plates (they are coated in plastic so that they don’t damage gym floors if dropped). I had to carry two in each hand from one side of the room to another. The plastic coating made them slightly slick which increased the difficulty of the exercise.

As I mentioned at the start of this article, my second Personal Training Session with CustomFit Training felt very much like a strength training session. While the exercises themselves were very different from what I do during my own gym sessions, the feel was very much the same.

The biggest difference between the two is that when I’m on my own, lifting at Anytime Fitness of Gilbertsville, I’m pushing hard for a long period of time. There are times when I’m in the gym for two hours. When I walk out the door I feel like I’ve got nothing left in the tank. I’m absolutely drained physically.

When I left CustomFit Training I felt like I could have gone for another hour. Don’t get me wrong, it was a solid workout with difficult exercises. I had some soreness and muscle fatigue the following day, however, it just didn’t match the intensity of what I do on my own when strength training.

My third session, on the other hand, was an entirely different experience and I walked out of the door feeling like I gave my all. More on that next time…

If you are interested in following along with my Personal Training Sessions with CustomFit Training, the series has been outlined below.